In France, New Year’s Eve is called ‘la Saint-Sylvestre’ or ‘la fête de la Saint- Sylvestre’, named after the saint of the day – a pope who lived from 314 to 335 AD. The French have celebrated New Year on different dates throughout their history. During the sixth and seventh centuries, it was celebrated in March, then during the reign of Charlemagne, it was swapped to Christmas day. It seems almost every bank holiday was tried and tested. During the tenth century, Easter Sunday became the New Year and again on April 1st (fool’s day for us!) until the sixteenth century, when King Charles IX issued the Edict of Roussillon, which stated that New Year was to be held on January 1st. Hurray! They got there in the end!

Like many countries throughout the world, the French love to host a party, especially on New Year’s eve and traditionally in costumes (des soirées déguisées) with a change of theme year to year and party to party. You can expect the usual resolutions to be declared for the beginning of a New life’s chapter and of course the French serve plenty of their wonderful food and drink for the occasion.

In England, it is traditional to hear the Queen’s speech, addressed to the nation on Christmas day, but as France is a Republic, secular country, the country’s president marks the end of the old and the start of the New. The President of the Republic delivers his message to the French people from the Palais de l’Élysée.

How to Celebrate at Midnight

Whether you are celebrating at a party, or at home with your family and friends, it is tradition across the world, when the clock strikes midnight, signalling the New Year, to make as much noise as possible. The French are no different. Fireworks and party time! Bonne année is Happy New Year in French.

Celebrating the New Year might even involve giving one another a kiss under the mistletoe, as the French tend to leave this tradition until midnight on New Year’s Eve. The French are considered a more passionate race; kissing is a common greeting on an ordinary day, so, for a celebration, they’ll be plenty of it happening around the country.

Another French custom is the exchanging of ‘étrennes’ on New Year’s Day. This would usually be a small amount of money or candy, given to the children from members of the family, although many employers use the opportunity to reward their workforce with a bonus. 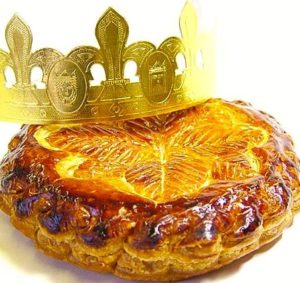 A Cake of the Kings

In France, the festive period goes right through until the sixth of January, the day of the Epiphany, when the Three Wise Men presented their gifts to the baby Jesus.

Across France, you will find people indulging in a Galette des Rois (a cake of the kings), which contains one or more small plastic figurines inside. If you find one of these figurines in your slice, you get to don the crown provided for the occasion.

All of us at Les Viellies Ombres will be celebrating in French style this year. We want to take this opportunity to wish everyone a very Happy New Year and all the best for 2019. We would love to welcome you as our guests next year.